In this release, we are happy to announce the introduction of a new metric aimed at remedying the measurement challenges introduced by the rollout of Apple’s iOS15 Mail Privacy Protection (MPP). With the introduction of our “Adjusted Opens” metric, we aim to identify true opens by separating opens by proxy and opens by humans. We’ve also introduced new ways to filter your audiences during campaign setup before sending to external partners. Additionally, we’ve added further campaign functionality within our visual audience segmentation builder, Blueprints, and introduced static audience splits in addition to percentage splits.

In September 2021, Apple iOS 15 was released which includes a new email client. This client will eagerly fetch the majority of images as the email is delivered to the inbox – well ahead of when a human might open it. Open tracking is expected to increase drastically. This initiative aims to separate opens by proxy from opens by humans and expand our reporting to include both metrics. An adjusted opens metric will be added to the UI, which is defined by (total opens minus proxy Apple opens).

Column Customization
When a user selects an SFTP or cloud storage destination, they now have access to a column customization tab. Within this tab, users can customize their audience by renaming columns, removing or adding columns, and reordering columns. Users can also see a live preview of any changes they make in the table preview section beneath the column editor.

Associated Campaigns Modal
Users can now view an associated campaign modal to see how their Blueprint is being used by different campaigns. This modal displays a list of campaigns that target the Blueprint, along with the destination or sending channel, the count of targeted nodes, the count of recorded nodes, and the schedule. If the user has access to both marketing and external campaigns, then the list is split between external and marketing campaigns. Users can also click on the campaign name to open the campaign overview page in a new web browser tab.

“Campaigns Using this Node” Modal
On each Blueprint node, we have replaced the trashcan with an ellipsis button. This ellipsis now contains 2 action items: view campaigns and delete. The view campaign action will open the campaigns using the node modal, where the user can view a list of campaigns using that specific node. Included in the list is the destination or sending channel, indication if the node is being targeted, indication if the node is being recorded, and the schedule. If the user has access to both marketing and external campaigns, then the list is split between external and marketing campaigns. Users can click on the campaign name to open the campaign overview page in a new web browser tab.

Blueprint Static Split
Users can now toggle between percentage and static splits. Percentage splits are the same splits that already existed (an audience split by percentage), while static splits allow users to enter a static number to split their audience.

Screenshot (below): Create a Campaign from Blueprint 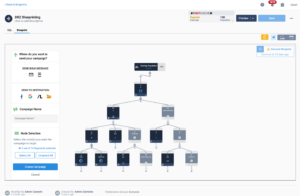 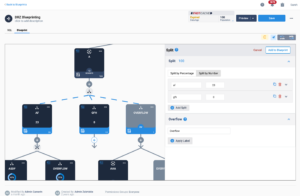